Get 10% OFF Your Entire Cart at Checkout! Use the Promo Code SPRING10.

Angels are spiritual beings created by a higher power. The Kendra Sunderland FleshLight Angel Sensation will help ascend you to a heavenly climax with her transcendent sensation.

Featuring multiple layers of spiral-shaped pleasure halos to make you rise up and meet your creator. You've fantasized about her and now you can feel her every night, any time you want her. Kendra Sunderland is the newest Fleshlight Girl to have her naughty bits molded, here you get Kendra's world famous Vagina in her signature Angel Texture. The gorgeous Kendra Sunderland made her exclusive debut on Vixen and became a Vixen Angel soon after in 2016. After several exceedingly successful scenes, she now holds the prestigious and unique title, Kendra Sunderland VIXEN Angel Of The Year for 2017. 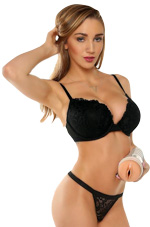 Kendra Sunderland earned her honorary title for her outstanding talent and charisma on and off screen as well as for her natural ability to embody the sophistication of the VIXEN.com brand. As the reigning VIXEN Angel of the Year, Kendra received an exclusive contract with the VIXEN, which includes being featured in several big budget movies, representing the brand all over the world in appearances and signings, a signature VIXEN diamond necklace valued at $20,000 and a sex toy molded after her by leading adult product brand FLESHLIGHT for VIXEN.

Far beyond the average ordinary simulated skin material, Fleshlight's signature Superskin is elastic and soft, easily maintaining shape and warming naturally with touch and friction. To play with temperature even more, soak the sleeve in warm water before use, and heat up your Water-Based Lubricant while you're at it. Styled like a traditional flashlight, the light-colored FleshLight Girls Kendra Sunderland's Vagina Vixen Angel Sensation Stroker Male Masturbator is shaped to maximize grip and control.

Wedge the firm casing between couch cushions or pillows to ride hands-free, or try out a specially designed mount that simulates sexual positions like doggie style, missionary and guy-on-top (sold separately in our Fleshlight section). The PhoneStrap can be used to Discreetly watch your favorite pornstar without having to hold or prop up your phone or tablet. Keep your phone or mini tablet handy as a "second screen" while watching TV. Video chat with your partner from a more suggestive angle that can show more than your face. You can add some accessories like the LaunchPad Device for Tablets for even more fun on the go. The Fleshlight Kiiroo Launch Bluetooth-Enabled Rechargeable Automatic Stroking Machine offers a fully automated Fleshlight experience for manual use or by connecting your toy to the interactive world.

To keep it all in the family you can also get the FleshLight Fleshlube Water Water-based Lubricant, some Fleshlube Fire Water-based Warming Lubricant to add some heat or some Fleshlube Ice Water-based Cooling Lubricant to chill out with a favorite video. Making for quick clean-up, the entire unit easily disassembles. To clean your Fleshlight and have it ready for the next session, rinse thoroughly with warm water, avoid using any soap, for tougher cleaning jobs, try the FleshLight Fleshwash Anti-Bacterial Toy Cleaner it works well.

It's important to let the insert dry completely before storing it away, to help make drying easier use the Pleasure Products USA Absorbing Drying Wand for Male Masturbators & Strokers that just slides in. With regular use, the sleeve might get a bit sticky, if this happens, just sprinkle it liberally with cornstarch or FleshLight Renewing Powder to restore softness, to store it also coat it lightly with other equivalent renewing powder like Cyberskin Renew Powder or Main Squeeze Refresh Powder. Store this toy separately from other sex toys.

Sunderland developed a following quickly, and a user commenting on her live stream suggested a zany plan. The user said she should start performing masturbation scenes in increasingly public places. Kendra decided to follow the advice, and what followed has since been enshrined in the lore of OSU, the internet and the court proceedings of the state of Oregon. By the end of the semester, Kendra Sunderland was performing cam shows in locations such as the OSU student library. She began making more money and subsequently decided to quit school to focus on her show. While people often walked obliviously behind her in the cam videos, Kendra Sunderland's fan base grew quickly and displayed a self-evident enthusiasm.

Kendra's meteoric rise from being a local celebrity called "Library Girl" to modeling a signature Fleshlight product is the stuff of myth. A daring spirit, she has done everything on her cam show from the mundane, such as catering to bubble gum fetishes, to the absurd, such as licking the bottom of her own shoe. Truly a porn star built for the Social Media Age, she gained acclaim on account of her long and lean figure, flowing blond hair and natural 32G breasts. Her boundless sense of adventure is what first made so many followers fall in love with her, and now they can take the excitement level higher with the Vixen and Tushy Pack, which includes the Kendra Sunderland pocket pussy and brings along a modeled orifice from another of her Vixen Angel friends. Fans of the "Library Girl" video have doubtlessly wondered what it feels like below the waistline, and they can now experience the internet sensation with this exclusive Kendra Sunderland sex toy. You may also go back to where it all began with the maddeningly hot Library Girl Study Pack. Adventurers can even get more bang for the buck by looking into planning a Fleshlight orgy.

The dream of hanging out with the wild college girl who's down for whatever is a classic fantasy and Kendra Sunderland quickly established a reputation for boldness by asking, "What about the library?" The sensation will never feel as real as when you first encounter the initial "kiss" of the flawlessly arranged lips at the vaginal opening, an orifice that'll have you picturing Kendra Sunderland's arousal with every motion. Pushing deeper with each stroke, you'll feel the ultra-smooth half-beads designed to massage the shaft into ecstasy. The naturalness of the experience replicates the same intensity you witness in every video of Kendra Sunderland. A clinching sensation is generated by Fleshlight's distinct massaging nub pattern that includes rows angled inward, outward, forward and backward. Replicating the experience of having sex with Kendra Sunderland, the Lady Sleeve offers the same sort of wild ride the bold college student has been on since she first earned the porn world's attention in 2014.

The Kendra Sunderland pocket pussy is a work that will take you back to those college classes that taught you an artistic appreciation of everything that could be interpreted as vaginal. With a flower-like bloom, the lips are enticing, inviting you to explore. You'll feel every inch the way Kendra Sunderland did when she was first recording in the OSU student library. You can also see that all your moves will be silky smooth by using one of the options from the Fleshlube Elements Pack. When it comes time to take a study break, this Kendra Sunderland sex toy offers the sweet release you desire. Pair it with the Fleshlight Sleeve Warmer to readily heat things up, and you'll instantly appreciate the mind-blowing rush each boyfriend who has ventured onto Kendra's cam show felt. The multiple layers of spiral-shaped pleasure halos await your arrival. In no time, you'll understand why Kendra Sunderland was driven to touch herself and share the experience with the whole world. Discover the Kendra Sunderland Fleshlight experience for yourself today.