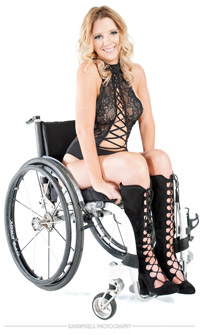 Chapman is known to the media as “The Paralyzed Bride.” Just weeks before her wedding, four of Rachelle’s friends threw her a bachelorette party. At the end of an evening of dancing and celebration, they decided to take a moonlight swim. One of her friends playfully pushed her into the water, 2 feet too far from the deep end. That chilling moment changed her life forever. Rachelle broke her neck and was paralyzed from the chest down.

But the vibrant, beautiful, young Rachelle Chapman became an advocate for people with disabilities, hasn’t let these life-changing events slow her down in and out of the bedroom, and is thrilled about representing Dallas Novelty, enjoying the vast array of pleasure products the company has to offer men and women in her position.

“When I first had my spinal cord injury, I wondered how I would have sex and what that would mean for my relationship. I quickly learned that even though my sex life would be different it would very much still exist,” says Rachelle. “Sex and intimacy is an important part of my identity as a woman and once I discovered my sexuality I felt secure and confident. Many people don't realize that people with disabilities can be intimate and sexy and that needs to change. Dallas Novelty acknowledges the sexual needs of people with disabilities and that means a lot to people like me.”

“We are excited to announce the addition of reality TV star Rachelle Chapman to the Dallas Novelty team. She has openly talked about having a healthy sex life and has a child even though she is wheelchair bound due to a tragic accident that left her paralyzed at her bachelorette party,” says Marketing Director Nick Mahler. “Our company has been focusing on helping our disabled and aging customers who still want intimate pleasure in their lives but need to do things differently than able-bodied customers. Since this niche part of the pleasure business is growing larger every year, I think Rachelle will show more people that even though they might have mobility issues you can still have steamy, pleasure sessions solo or with a partner. Dallas Novelty has special categories that give customers more choices in sex toys and accessories.”

Rachelle’s duties will include media interviews on sex and disability, and reviewing the latest products that ring her and her husband’s bells. Rachelle has written an inspiring book about her struggle and triumph called “The Promise: A Tragic Accident, a Paralyzed Bride, and the Power of Love, Loyalty, and Friendship” and can be purchased here.