Super Summer Sale!! Get 10% OFF Your Entire Cart Automatically at Checkout! No Coupons or Promo Codes Required. 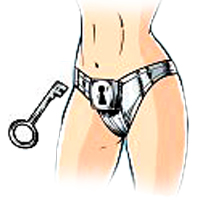 Chastity play is the exciting practice of submission and control. The act of giving yourself entirely to your partner, and placing your sexual gratification entirely in their hands. Dallas Novelty offers some of the newest and most popular chastity devices on the market today, for men and women alike.